Watch Shia LaBeouf Watch Himself In His Latest Unusual Project 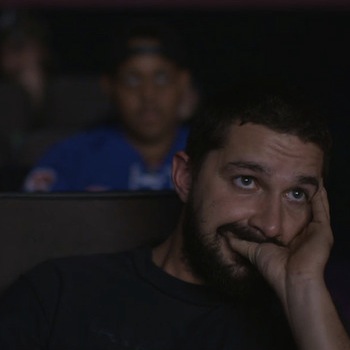 If you’ve been feeling like it’s been too long since Shia LaBeouf did something weird, then wait no longer. The actor has a new project in which he sits in a movie theater for days, marathon watching all the movies he has been in while audience members look on at his multitude of reactions.

LaBeouf’s project is called #ALLMYMOVIES and is taking place in a New York City movie theater. He only takes 5 minute bathroom breaks between films and stays in the theater all through the night and days, as long as it will take him to get through his twenty seven film body of work.

People reports about the project that is a collaboration between the actor, Nastja Säde Rönkkö and Luke Turner. Admittance to the theater is free for New York residents who have the patience to stand in a long line in order to nab a seat in the same room with LaBeouf.

If you’re even mildly interested but can’t make it to New York, the actor has a constant  live stream going of himself viewing his movies.Theater goers report that LaBeouf has displayed a variety of expressions and moods during the movie marathon from crying and laughing to taking a nap. Films that he is screening include his upcoming movie Man Down and others like Transformers, Disturbia and A Guide to Recognizing Your Saints.

Are you a fan of Shia LaBeouf?

What do you think of his latest project?