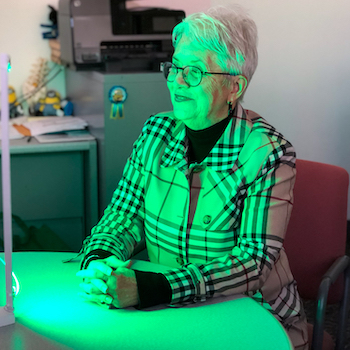 As the opiod epidemic rages across the country, researchers are always looking for safer and less addictive ways to reduce chronic pain. A new drug-free type of light therapy is showing some promise for migraine pain-suffers that want to avoid the use of opioids while also experiencing pain relief.

Minnesota Public Radio reports about a green light therapy study that has helped migraine suffers find long-term solutions for their ongoing pain. Ann Jones was involved in a 2018 study that she felt was a last-ditch effort to control her chronic migraines that were just getting worse as she aged. The 70 year old admitted she has tried just about everything for relief, but was never able to find anything that would help long-term.

When her doctor suggested a study that involved green light therapy, Jones was skeptical but desperate enough to try anything. She began taking daily exposure to green light for 2 hours each day. It took a few weeks, but Jones who was once an almost daily sufferer of migraines began noticing she was going days without pain.

Jones explains, “I got to the point where I was having about four migraines a month, if that many, and I felt like I had just been cut free.” And the few headaches she was getting were not as intense or debilitating as the ones she had in the past. The green light therapy proved to be a success with others involved in the study. Author of the study Dr. Mohab Ibrahim reports that most participants saw a 60% decrease in migraine pain and a drop in migraines from 20 a month to just about six.

Before testing out the green light therapy on people, scientists had seen great results over and over again on animals. Researchers are not exactly sure why green lights seem to have this effect on headaches, but there has been research showing that green lights stimulate positive feelings in people.

For Jones, she realized that when she would go without the daily green light therapy her chronic headaches would return. She explains, “I made a commitment to go back on the green lights daily. The very next day I did not have migraine, and for five straight days I didn't have a migraine.” The only downside for relying on light therapy is finding the time to sit in a dark room with a light for two hours a day, but for patients who are desperate for relief it can be a life-saver.

What do you think of the new light therapy that is being studied to treat chronic migraines?

Would you try light therapy to reduce chronic pain?