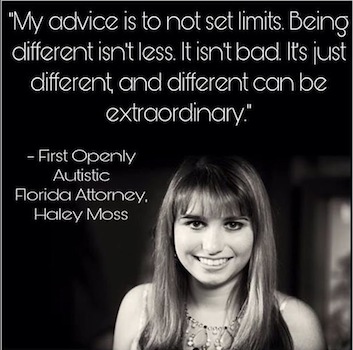 For a woman with autism who has spent her whole life advocating for herself and others, it seems natural that Haley Moss would share her story now that she is an attorney. Moss, who recently passed the Bar exam in Florida, has become the “first openly autistic lawyer” and hopes that her voice can help send an inspiring message to parents and their children who have been diagnosed with autism.

CBS News reports about Moss’ journey to becoming a lawyer and the way she learned to share her story along the way. Moss was diagnosed with autism at 3 years old. And though she was profoundly gifted, reading and completing 100 piece puzzles as a toddler, she did not speak. Once Moss entered elementary school, she begand speaking and joined mainstream classes.

Early on, Moss felt the need to share her story about growing up with autism. At the age of 13 she spoke at a conference about autism and says, “I've always enjoyed getting to connect and share.” Just two years later at the age of 15, Moss wrote a book entitled “Middle School — The Stuff Nobody Tells You About: A Teenage Girl with ASD Shares Her Experiences.” She also began creating art at this age and continues to be a prolific artist.

Moss says she decided to study law as a way to give back to her community. After studying at the University of Miami School of Law, Moss was offered a job at a law firm on the contingency that she pass the Bar. Now that she has passed the test, she is part of a Florida firm and focuses her law services on health care and International law. She hopes that spreading her message all of these years will help those with autism realize that it does not have to hold them back. Moss says, “Whether it's somebody on the spectrum that says 'Thank you for sharing your story,' or it's a parent of a newly-diagnosed child that tells me, 'Wow, you gave me so much hope for my kid. I can't wait to see what my kid's going to be able to do when they get older.' Yes, it's definitely an impact.”

What do you think of Haley Moss becoming the “first openly autistic lawyer”?

Do you think Moss’ advocacy will inspire others on the spectrum?