Robots to Relieve Stress on Supermarkets, But Will This Lead to Fewer Jobs For Workers? 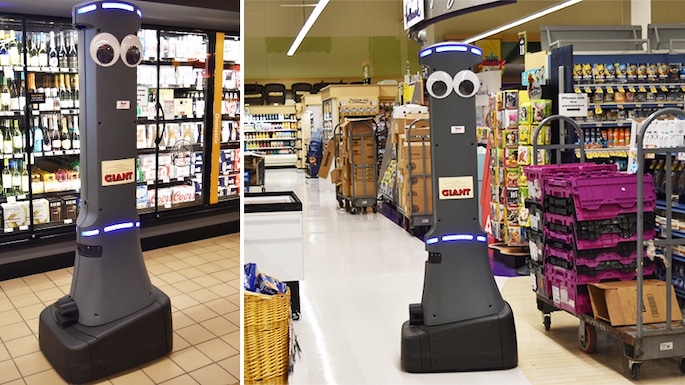 Image: Giant Food Stores
Share Tweet
2Add your comment
If you or someone you know is working at a grocery store now, you may be happy to hear that there is a fleet of robots being deployed to both local markets and big chains to take a little bit of the load off of workers’ backs. In an effort to reduce some of the stress currently hitting these stores nationwide, it is hoped that robots can help out with things like mopping floors, stocking shelves and delivering orders to customers.

CNN reports about the move to add more working robots to grocery store establishments and how this effort could possibly help all of us during the Coronavirus crisis. Robots and AI have several functions for stores that are currently understaffed and overwhelmed in these times.

Bill Bishop, co-founder of retail and grocery consulting firm Brick Meets Click, believes this trend has been coming for a while and the pandemic is just speeding it up. Bishop says, “There's strong interest in moving rapidly in this direction because everyone knows they need to raise their game to stay competitive and it's ultimately more cost effective to automate than staff up, especially in today's labor market.”

Walmart is one of the stores rolling our robots that they call “smart assistants” in almost half of their stores. The smart assistants in Walmart stores can scan shelf inventory and also scan and sort boxes that come directly off delivery trucks to the store.

Steven Keith Platt, research director for the Retail Analytics Council and adjunct professor at Northwestern University, agrees that robots in the supermarket were destined to become a thing and COVID-19 may just serve to introduce the public to a new way of shopping. Platt says, “I strongly believe that the current health crisis will accelerate the adoption of robots in retail. Short-term, this is to address health concerns.” But he goes on to explain that the long term plan for robots will include preparing our food and stocking shelves regularly.

Unfortunately, the downside to retail stores adopting more AI is that eventually the minimum wage job market will suffer, finding more jobs taken over by robots. A recent report from the Brooking Institute suggests the Corona Virus will increase automation and eliminate human jobs saying, “any coronavirus-related recession is likely to bring about a spike in labor-replacing automation.” The report goes on to say, “Automation happens in bursts, concentrated especially in bad times such as in the wake of economic shocks, when humans become relatively more expensive as firms' revenues rapidly decline.”

What do you think of grocery stores employing robots to relieve some of the stress on workers during the pandemic?

Do you think we will soon see a surge in AI replacing minimum wage jobs?