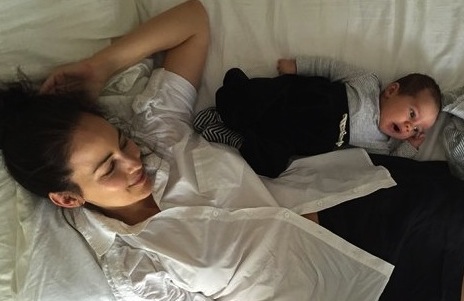 Paid maternity leave is a major perk most of us never see, especially for any amount of time that extends past a few weeks. But there is a growing number of people that feel that the U.S. should get on board with offering longer maternity leaves, like those seen in Australia and many European countries. Mom, Amber Scorah, recently lost her 3 month old son Karl when he passed away at his daycare facility. She is telling her devastating story in an effort to send a message about the state of forced child care and what needs to change.

Scorah recently wrote about her tragic ordeal in the New York Times explaining how her son passed away on his first day of daycare and her first day back to work. She explains how she and her husband were very hesitant to send their 3 month old to daycare, but felt they had no choice if they wanted to stay financially afloat.

After much deliberation and research Scorah chose a recommended daycare near her work that she felt good about, especially since she could come in every day around noon to breastfeed Karl. On the very first day, Scorah entered the daycare to breastfeed her son and found that he was lying unresponsive while a daycare employee performed CPR on him incorrectly.

Since her son’s death she has learned that the daycare worker placed her son on his side to sleep rather than the safer back-lying position. She was also told that one daycare worker noticed her son kicking in his sleep a few minutes before becoming unconscious, but was told by another worker not to check on him since “Babies kick their legs in their sleep all the time”.

Though Scorah admits she has many more questions and is unsure whether Karl’s death could have been prevented. She writes, “What I do know is that had I been with my 3-month-old son, I would have gone over and checked on him at that moment. What I also know is that my son would have been safely on his back to sleep, if not sleeping on me, as he loved to do on all our days home together. Regardless of the answers I will never have, the question I now ask is: Should parents have to play this roulette with their weeks-old infant?”

No matter the circumstances of who or if anyone is to blame for Karl’s death, Scorah states that the real message she wishes to send is that there is a problem with a culture that does not allow working parents to care for their own children when they are just weeks old. She writes, “This article isn’t about day-care safety. This isn’t an indictment of the company I work for; I had one of the better parental leave policies of anyone I know. What this article is about is that my infant died in the care of a stranger, when he should have been with me. Our culture demanded it. A mother should never have no choice but to leave her infant with a stranger at 3 months old if that decision doesn’t feel right to her.”

What do you think about this mother’s tragic story?

Do you think all parents should be given longer maternity leaves?