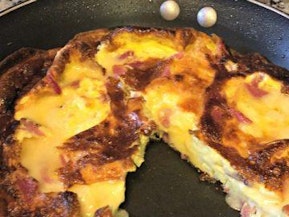 Description: I have joined the low carb world! I am not ready yet to say "keto" so I am just gonna say low carb. This morning I was trying to come up with a breakfast that everyone would eat and while rummaging in the refrigerator I spotted some brie. This meant I NEEDED to make something with brie. Since Easter was just last weekend we still have ham coming out of our ears so my Low Carb Ham and Brie Frittata was born! It turned out so yummy and was easy to make.

Instructions: Chop ham to your liking. I use my handy dandy scissors for this.
In a 10 inch saute pan, cook chopped ham over medium heat until warm and greasy. Remove from skillet but leave the lovely grease in the skillet.
In a large bowl, whisk eggs with cream, garlic, salt and pepper and most of your ham. Set skillet over medium low heat. Spray sides with a little oil to prevent sticking.
Pour egg mixture into skillet and cook until edges are set up but center is still loose, about 10 minutes.
Preheat broiler to high. Lay slices of brie on top of egg mixture. Sprinkle with remaining ham. Place in oven on rack on second setting. Broil until puffed and golden brown, about 5 minutes. Make sure to watch carefully so it is cooked through but doesn't burn!
Remove from oven and cool a few minutes before serving.


via The Neighborhood Moms

Other recipes in breakfast & brunch 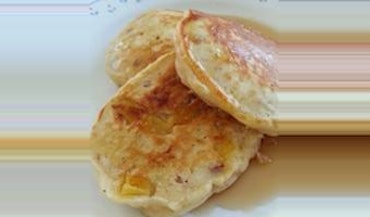 Flavorful pancakes full of pineapple, coconut and pecans. Top with real maple syrup for a breakfast treat or ice cream for a delicious dessert.
Read 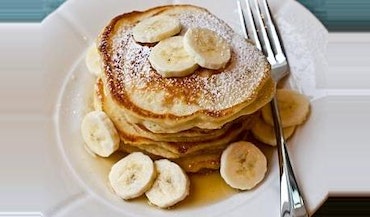 Fluffy on the inside, crispy on the outside, and delicately flavored with bananas and honey.
Read 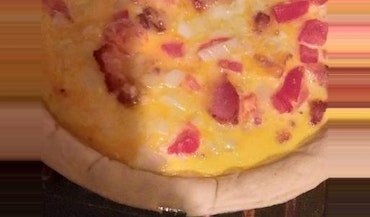 Quiche made my way.
Read